With Over 20,000 events, from the biggest national events, to local targeted shows, iHeart has it all. 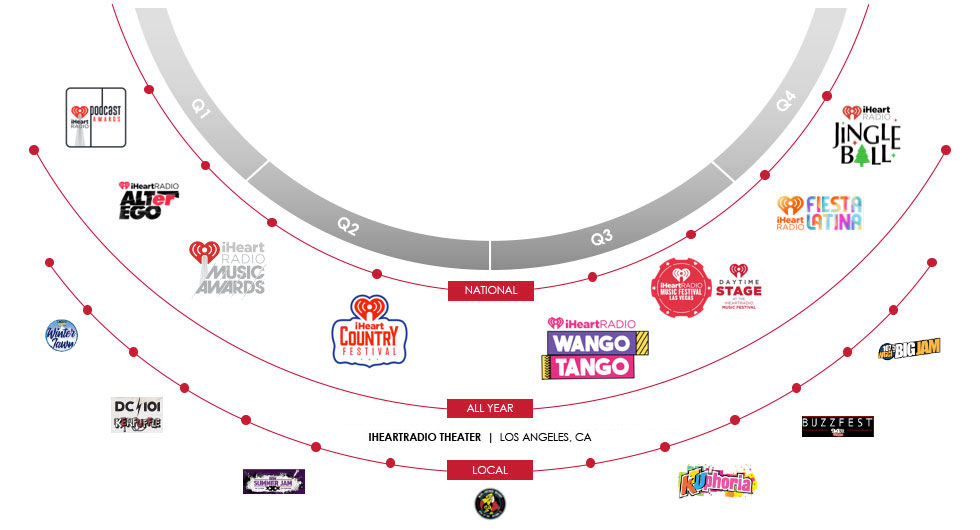 The biggest names in country share one stage for one night in Austin to celebrate the best country music has to offer. Last year, iHeartCountry Festival generated 1.8 billion social media impressions, which is 5x that of Austin City Limits Music Festival and 1.6x that of Stagecoach Festival.

The hottest Latin artists, all on one stage, for one night to celebrate Latin culture. Last year, iHeartRadio Fiesta Latina generated 1.8 billion social media impressions, which is 10x that of Univision's Premios Lo Nuestro and 2.7x that of Premios Juventud.

The biggest names in alternative rock come together for a one-of-a-kind, headliner-only show at the LA Forum. Last year, iHeartRadio ALTer Ego generated 3.7 billion social media impressions, which is 8x more than Dick Clark's New Year's Rockin' Eve show and 4x that of the Golden Globes.

The official kick-off to summer, lasting all day and into the night in Los Angeles, with the top artists of the year performing together on one stage. Last year, iHeartRadio Wango Tango generated 1.2 billion social media impressions, which is 28x larger than Austin City Limits virtual festival.

The iHeartRadio Theaters are the premiere entertainment destinations where legendary artists take the stage to perform their biggest hits and unveil new music.